This interesting and economical board mounts an ARM Cortex M4 MCU type STM32F407VET6 produced by ST Microelectronics and is also called “black board” or “black pill” due to the dark color of the pcb. There are several versions, the one I used is shown in figure 1.

The MCU has 100 pins (LQFP100 package), so it is suitable for those applications where a lot of I/O and also a remarkable speed of execution are required. Its main features are: 168MHz clock, 512KB of Flash memory, 128KB of RAM, 82 GPIO (many of which 5 volt tolerant), 16 12-bit analog channels, 2 12-bit DAC channels, a USB OTG port and many other things. Among these, a 32768 Hz crystal RTC and 4kB of RAM rendered non-volatile by the backup stack.

I bought this interesting and inexpensive card not only for the reasons mentioned above but also because it had an micro SD card connector. I had already done several projects with the STM32F103C8T6 board, also called “bluepill”, compiling with Arduino IDE after loading the package and I wanted to experiment on bigger systems too.

It is not connected to the SPI bus but to the SDIO bus and the Arduino libraries use the SPI. To be able to use the more performing SDIO interface, you need to change the development environment, but I didn't want to do this.

To overcome this obstacle I connected the SD to an SPI bus with three external wires connected to the pins available on the various connectors. This is easily achieved by connecting the pins with the wires headed with female Dupont connectors the card is equipped with. The original connections do not go into conflict as I initialize them as a pull-up input, therefore, inserting the resistors that were missing.

Table 1 – Wiring to do for SPI bus

At the top of the program, among other instructions, these should be placed:

The following instructions must be entered in the setup () function:

The tests gave positive results with the SD.h library and negative with STM32.h.

With this simple trick I could also use the SD card with Arduino IDE.

Posted by Giovanni Carrera at 10:00 No comments:

How to sterilize corona virus masks 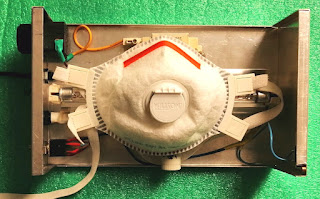 Introduction
First of all, I want to reiterate that I am not responsible for what I will expose in this article, it is just an idea that came to me reading that ultraviolet rays alter the DNA of viruses and make them harmless. To have a scientific validity it is necessary to know other information such as the intensity of UV radiation and the exposure time necessary to eliminate them. In these times of forced isolation, I thought of reusing the lamp of an old eprom (Erasable Programmable Read-Only Memory) eraser that I had at home. These non-volatile memory chips had a fused quartz window to erase them by exposing them to a special ultraviolet lamp for a few tens of minutes.

The lamp
The recommended exposure time for eproms was 20-30 minutes with a UV lamp with a wavelength of 253.7 nm with an intensity of at least 15W / cm2 and at a distance of approximately 2.5 cm.
The lamp of my eraser, shown in figure 1, may have similar characteristics.

It is a transparent fluorescent tube, having no internal phosphor coating, with a power of 6W. The lamp housing is made of fused quartz or Vycor as the common glass filters UVC rays. The efficiency is around 30-40%, which means that the effective radiated power is at most 2.4W so it is necessary to use an aluminum reflector to put under the lamp, as seen in the prototype photos. Even a thin sheet of aluminum, like the one used in the kitchen, acts very well as a reflector.
As you can see from the photo, the lamp has the writing "GERMICIDAL" G6T5 GL-6. It is not difficult to find them on the market because they are widely used for disinfection of air and water. Philips also produces several lamps with a wavelength of 253.7 nm (UVC) from the TUV TL series. The cost is less than 10 €.
Warning, UVC lamps are very harmful to the eyes and skin, therefore all precautions must be taken, as I did in my project.
The lamp, like all fluorescent tubes, requires a ballast suitable for its power and a starter.
A tanning lamp (UVA) is not good or, in any case, does not have the same effectiveness.
Even the black fluorescent tubes, coated with special phosphors that filter the visible light (> 400 nm), emit UVA radiation.


Germicidal lamps made with UVC led arrays are also on the market, but these are of higher wavelength (265-290 nm). From what I have seen in the datasheets, these LEDs have not high powers and low efficiency (10%), therefore different ones are needed and they are also quite expensive.

My realization
I made my system with what I had at home. I disassembled the lamp, ballast, starter and timer from the old eraser and mounted them in a suitably sized aluminum cabinet, as seen in the images in figure 2. 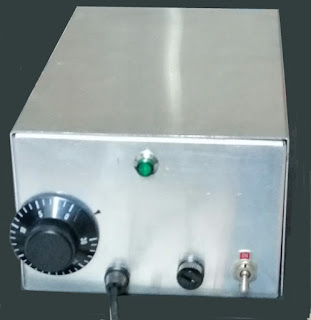 On the bottom right side I mounted a micro-switch to turn off the lamp when the cover is open, as seen in figure 3. The timer used is mechanical.

Of course you could make this system in better ways, perhaps by inserting a support for the mask, but I made it with what I had at home.
The green light that can be seen at the top acts as a simple slide, lights up with the light of the lamp and indicates that it is working.

The scheme is shown in figure 4.

Posted by Giovanni Carrera at 09:23 No comments:

A DIP switch for Arduino

The DIP switch is a set of small switches in a Dual In-line Package. It finds numerous applications, such as address configurator, select a type of operation, enter a remote control code. 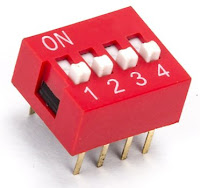 Normally the dip switches require as many digital input pins as there are dip switches used and also with pull-up resistors enabled. In the proposed circuit I use only one analog input for four dip switches.


This article is also particularly useful for applications with ESP8266 which has few I/O pins but has an analog input with a full-scale of 1V.

After developing a project to read a 4x3 keypad with three analog inputs [1], I was thinking of applying this methodology to dip switches too but things are not at all similar. The buttons close only one at a time and are monostable while the dip are bistable and also can close all together.
After several attempts, simulated at computer, I arrived at the synthesis of the circuit shown in figure 1.
In theory, the values of the R1-R4 resistors should be 1, 2, 4, 8 kΩ, but even with the standard values I used, good results are obtained. If we measure the resistance between Vo and Gnd, we have a value that is proportional to the binary number set, but the Vo voltage will be equal to:
Vo = Vcc*R14/(R5+R14)
Where with R14 I indicated the sum of the resistors R1 to R4 not short-circuited by the dip switches. As can be seen, now the law is not linear, but it suffices to put R5 large enough to minimize the current variation. This will reduce the output voltage, but by setting the Arduino reference voltage as "INTERNAL" we get a full-scale Arduino UNO ADC converter equal to about 1.1V.
Indicating with "ON" the closed switches and with "OFF" the open ones and setting Vcc = 5V the following table is obtained.
Where NADC is the output number of the 10-bit ADC converter. With four dip we represent 2^4 = 16 different states that must be identified precisely. The program must discriminate each state with two thresholds NADC_L (lower) and NADC_H (upper). The number of 10 bits, at the converter output, must be between these two limits which I determined with ± 20 units with respect to the NADC value. The diagram in figure 2 clearly shows the intervals and the output voltage Vo as a function of the number set on the four dip.
As can be seen, the trend is fairly linear and the intervals DN range from a minimum of 46 to a maximum of 71, so the thresholds of ± 20 do not overlap.
As shown in the table, by powering the circuit with Vcc = 5V, the maximum output voltage is 908.44 mV, lower than the maximum voltage (1100 mV) accepted by the converter.
If you need an 8-pin dip switch, just duplicate the circuit and use a second analog input. Figure 3 shows a connection diagram of the individual components.

The circuit is realized with few soldered joints and it is also easy to draw the printed circuit. Figure 4 shows the appearance of my prototype seen from the component side and from the soldered side. I used a small perforated circuit board of about 40x30 mm.
I have optimized the circuit for Arduino / Genuino Uno and the program is fine for MCU type ATmega328 / 168. But it can also be used, with minor modifications, with other MCUs, such as SAMD21G18 mounted on Arduino Zero and Arduino MKR1000 boards and also ESP8266 and 32.
I used a 3-pin strip connector for wiring with Arduino. The resistors must have a low tolerance, I used those with 1/4W metal film with a tolerance of ± 1%, very common and easy to find. Figure 5 shows the wiring between the DIP card and Arduino Uno.

The program
The sketch is an example of use of the circuit and provides both the number and the individual dip arranged in the DipSw char array. In this example I use Arduino Uno's pin A0 as an analogue input and in the setup I insert the analogReference (INTERNAL) instruction to set the internal Vref at 1.1V, more stable and less noisy than the default at 5V.
In the loop () function I set the discrimination to thresholds and in the readDIP function (byte mybyte) I create the array of characters ordered as the dip switches. This last function is useful to use every single switch.