Very few wires for a numeric keypad for Arduino


Very few wires for a numeric keypad for Arduino

Giovanni Carrera, 23/11/2018
The techniques for reading numerical keyboards with a reduced number of Arduino pins as analog inputs are described.

The aim of this study is to drastically reduce the number of pins required by a numeric keypad. This is because we often need many I/O pins compared to those available on the Arduino Uno or Nano boards.
With the help of some resistor you can turn the keypad to use only a few analog inputs, saving several digital pins. In some cases, as we will see, just one analogue input will suffice. Programs to manage them are also described.

The ordinary numerical keypads are structured in matrix because they require less wires and are organized in rows by columns. Usually the lines are configured as input and the columns as output. The program scans the array to see if a key has been pressed. A 4x3 keypad, like the membrane one shown in the figure, requires 7 Arduino digital pins. Numerous libraries are available on the net to use it with Arduino. 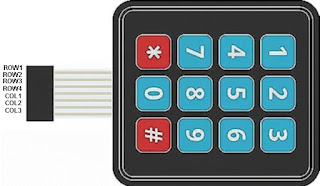 There are also several keyboard applications with one analogue output, but in my opinion they are very unreliable for this type of keyboards. To simulate them I created a template and a spreadsheet program to try out the functionality. The following figure shows the scheme and the equivalent model of a 4x3 keyboard with an analogue output. 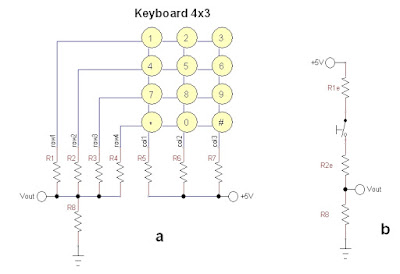 The biggest problem is that the range of variation is very limited and, consequently, also the intervals corresponding to each key. It is also difficult to distinguish the keys because the intervals may overlap in some cases. Having written the analysis program, I verified that the values they had chosen in some projects found on the network had these drawbacks, with minimum intervals of only 10mV.

My solution
The solution I propose is much better even if it uses three analog inputs, with a circuit like the one shown in the following figure. 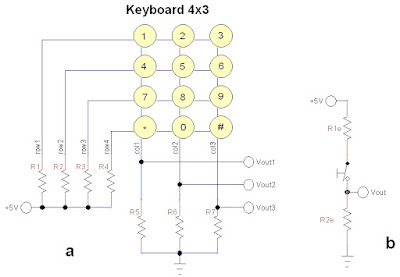 In this case you save only 4 pins against six of the previous version but it's worth it because the intervals are now only four, in addition to the rest position that is the zero volts (no key pressed). In the equivalent scheme (b) the R1e indicates one of the four resistors R1-R4, while R2e is one of the three resistors R5-R7.
Now let's see how to make the four widest possible intervals. First of all the resistors R2e = R5 = R6 = R7 can be made equal, then we can set R1 = 0 to have the outputs corresponding to the first line at 5V. With the values shown in the table:
The following intervals are obtained for each output:
As you can see, the intervals on the three outputs are the largest possible and you can use six standard resistors with a tolerance of ±5%. With an extra analogue input and another resistor, a 4x4 keyboard can be used. The following figure shows the connections with Arduino.

In the diagram the resistor R1 is connected to line 2 because the one on line 1 has drawn it with a wire, so the resistor references have been scaled by one. Pin assignments can be modified according to needs, as long as they are pin configurable as analog.
Of course, if Arduino were powered at 3.3V, nothing would change because the ADC converter as default uses the supply voltage and the ADC numbers don’t change.
To test the test program, not having a keyboard of this type, I built it with recycled keys, the figure below shows my prototype. The 5-pin right connector is used to connect it to the Arduino. 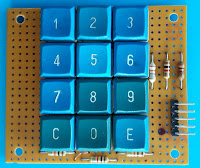 The Analog4x3Keyb.ino program
I reported the lower (NADCm100) and higher (NADCp100) limits on two numeric arrays and one character array for the 12 keys, arranged in columns. As you can see, in my keypad I used two different keys because they were more useful for my applications than the standard '*' and '#' keys that are more suitable for telephone applications.
To scan the three analogue channels, I initially used an index loop, but it didn’t work, so I used the KeyScan function. Double conversion is necessary to avoid the bounce of the buttons. For applications it is better to turn everything into a function.
I consider a button pressed if the value of one of the three outputs is greater than zero, for safety I put the value 40. The program first verifies on which column the key was pressed, then identifies the key itself.

void KeyScan(){// read analog keyboard
keyval[0]= analogRead(A0);
delay(1);
keyval[1]= analogRead(A1);
delay(1);
keyval[2]= analogRead(A2);
delay(1);
}
Keyboards with single common
I had a strange little keyboard organized as 12x1. After thinking a little bit about it, the simplest solution was to make a voltage divider and read the output voltage with an analog input.
I realized the circuit illustrated in the following figure, as you can see, only three wires connect it with Arduino. Naturally, this system can be easily adapted to even fewer keys, I do not recommend using too many keys because the intervals become too small. The keyboards organized in matrix, for example 3x4 or 4x4 have great difficulty for the analogue output, as already seen.

How to calculate the voltage ranges
To calculate the limits of the values used to identify the keys, I wrote a program in Excel.
The following figure shows the equivalent circuits of the divider (a) and the particular case of the keyboard (b). 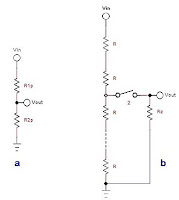 In fact, the series of resistors of the low branch is in parallel with Rz. The resistor Rz (R13 in the diagram) serves to bring the input voltage to zero, ie it acts as an analog pull-down.
Using these formulas for each key, appropriately adapted, the following table is obtained.

The NADC number is what can be read from the Arduino ADC converter (10 bit). The numerical interval DN between one key and the other goes from 84 to 94, even though all the resistors are equal, in my case R = 464 W, these intervals are slightly different towards the high values because of R13. For safety I chose the limits within ± 20, obtaining the NADC-20 and NADC + 20 values.
The experimental measurements on the prototype gave values very close to those calculated. The following figure shows my prototype detached from the keyboard for visibility reasons. It connects to the keyboard with a 13-pin female strip and a second 3-pin connector connects it to the Arduino. 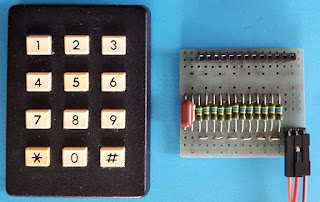 The Analog12x1Keyb.ino program
The program required some attention as regards the bounce phenomena on the keys. The pressed key leads to values higher than zero + possible noise, even here I have placed 40 as a limit. In the program I created two numeric arrays with the calculated limits and a third of ascii characters to assign the key. I only wrote a system test program and tested it on an Arduino Uno.

With a few modifications you can create a function that, if called, returns the character and if no key has been pressed returns a thirteenth character to indicate this state, for example 'N'.
This solution is particularly suitable in cases where you want to make a small custom keyboard, so we can organize it as we see fit. Another useful application is for 8-pin microcontrollers like ATtiny that have very few I/O pins.

With this circuit a resistor is saved, but the values of the upper branch of the divider are not all the same as in the circuit discussed above. To have equal intervals must be:
R3 = 2 * R4, R2 = R3 / 3 and R1 = R2 / 2
But it is difficult to use all standard values. The ranges are wide and the resistors can have a tolerance of ±5%. The standard 3 kW resistor can be obtained with two 1.5 kW resistors in series or a 3.3 kW resistor in parallel with a 33 kW one.

Posted by Giovanni Carrera at 18:57 No comments: