The purpose of this project is to provide a 4-20 mA output from a PWM signal generated by a microcontroller ATmega328 and numerous other chips, such as the PIC. One of the more interesting applications of this circuit would be to replace or to realize a smart sensor with Arduino.

Last year I had designed a circuit suitable only for Arduino Due, this new work makes use of a common Arduino Uno or similar to create a standard 4-20 mA analog output.
Arduino Uno, or systems based on the ATmega328 chip has no a true analog output. The easiest way is to use one of the PWM outputs and filter the signal with a passive RC filter to obtain an analog signal proportional to the duration of the pulses. This expedient creates a considerable noise due to the frequency of the PWM itself. To eliminate the noise I used a second order active low-pass filter, Sallen-key type. The frequency of the Arduino PWM (with 16 MHz clock) on pin 9 is about 490 Hz, so I used a very low cutoff frequency (11 Hz) but with a bandwidth sufficient for the majority of industrial controls.


By connecting the filter directly to the PWM output is obtained a signal which varies from 0 to 5 V which would give an output current of 0 to 20 mA. The pulses duration is programmed with a word of 8 bits, losing 1/5 of the full scale. To improve the current resolution from 20/255 to 16/255, I modified the minimum amplitude of pulses from 0 to 1 volts, giving at the output a 4 to 20mA current. The block diagram is shown in figure 1.

Figure 2 shows the complete diagram of the circuit. To obtain pulses from 1 to 5 volts I had to use a 1 V source realized with U1A and the transistor Q1 that works as a switch. The operational U1B operates as a separator; the filter uses U1C and the voltage / current converter uses U1D and Q2.
The transistor Q1 inverts the PWM signal, so the software must complement the number of PWM duty cycle.

The trimmer pot Rp1 is used to adjust the minimum output current (4 mA) and the Rp2 to adjust the maximum (20 mA). The theoretical value of the emitter resistor is Re = 5/0.02 = 250 W, but that does not take into account the tolerances of the voltage supply of Arduino and of the resistors.
The resistor R8 is used as U1D output current limiter in the situation of absence of load.
A step down converter is a good solution for powering the system because of the 24 V, this value can be varied from 12 to 30 V, depending of the load circuit.
Arduino Uno has a +5 V output pin, It does not recommend using it as a power input          inasmuch this would be in parallel with the internal regulator but it can be powered at +5V using the USB connector, other boards as Arduino Pro Mini, have a +5 V input.

Hardware components
1x Arduino board,
1x Step-down switching converter,
Components list
The capacitors used for the filter must be measured with a capacimeter, for my prototype I selected for C3 some 220 nF capacitors to search for a value that approached 200 nF and C2 have selected a value half of C3.  Q1 is a transistor that must have a low Vce(sat.) and Q2 must have a current gain of at least 100 and a Vceo of at least 40V with a minimum power of 500mW.
The operational amplifier U1 must be suitable also for single-rail power supply, such as LM324.
The components layout of my prototype is shown in Figure 3, the resistor on the top is a precision load used for calibration of the system. Q2 has a small heat sink because, with at 20 mA and a low voltage load,  as in this case,  dissipates: (24-3-5) *0.02 = 320 mW. In these circumstances is better to reduce the 24 v. 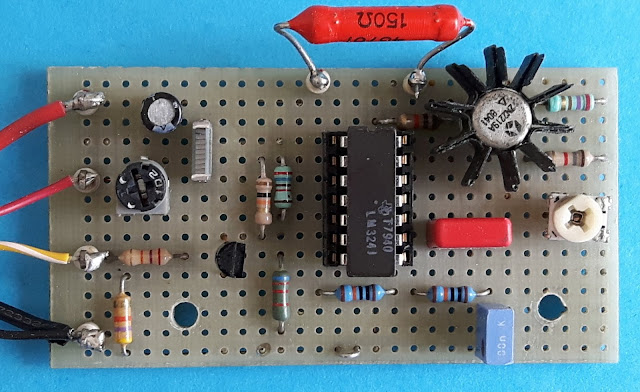 The test program
To test the system I used an Arduino with an LCD display and a potentiometer connected to analog input A0, as pin PWM I used D9. The program is very simple: read the potentiometer, converts 10 to 8-bit Analog reading and produces the PWM.

I reported on the spreadsheet the PWM values and the measurements in volts made on a precision resistor (150 W ±0.5%) that worked as a load,. The PWM / output current diagram is shown in Figure 4.

Posted by Giovanni Carrera at 19:14